This is where updates from our community producers are posted. Bluestone's Silk Videos is just one of about 20 producers who advertise regularly on FF!

meerkat
Posts: 61
Joined: Mon Mar 25, 2019 10:06 pm
What is your main fetish?: necro fetish, headshots.
Why do you want to join this forum?: Because i've been lurking for so long and I want to finally participate in chats, etc.
Referral: nope, just browsed and found the site.
Contact:
Contact meerkat
Send private message

Three lovely spies rummage through the darkness as they look for valuable, secret files. Unfortunately, their adventure has not gone unnoticed. The facility security man confronts the girls. The leader, Savannah, tries to feed him a story, all the while, reaching for her gun. He is a seasoned professional and knows what she is planning before she does. Before she can even level her gun, she is hit three times with his silenced pistol. She is in shock, falls against a table - looking at him with pained eyes, then crumples to the floor in agony - bleeding everywhere.

He steps over her, letting her writhe in pain. Then he seduces the second girl, while forcing the third to strip, until she is completely naked. After taunting her, he orders her to get dressed again. Then he locks lips with the second girl, Jennifer. She is caught up in the moment of seduction when he surprises her - shooting her point blank under her breast twice. She is in disbelief, if only for a moment, then slowly falls to the floor, paralyzed in pain. The third girl, who witnessed the whole thing, but did nothing to save her friend, now makes a run for it. He shoots her once in the back, slamming her against the door. She turns around and takes two more shots in her well developed breasts. She falls on the ground, prone.

He goes back to Jennifer, paralyzed in pain and fear on the floor, and finishes her off with two shots in each breast. Savannah, watching all her friends get executed, struggles in pain, slowly bleeding out. He cuts open their tops and bras to examine his work and she is dead by the time he is finished. As he leaves, he rolls the third girl, Miera, over. She is still breathing and looks at him with pleading eyes. He places his silenced pistol to her chest and shoots her dead. He leaves the bullet riddled, half-naked bodies for the cleanup crew. 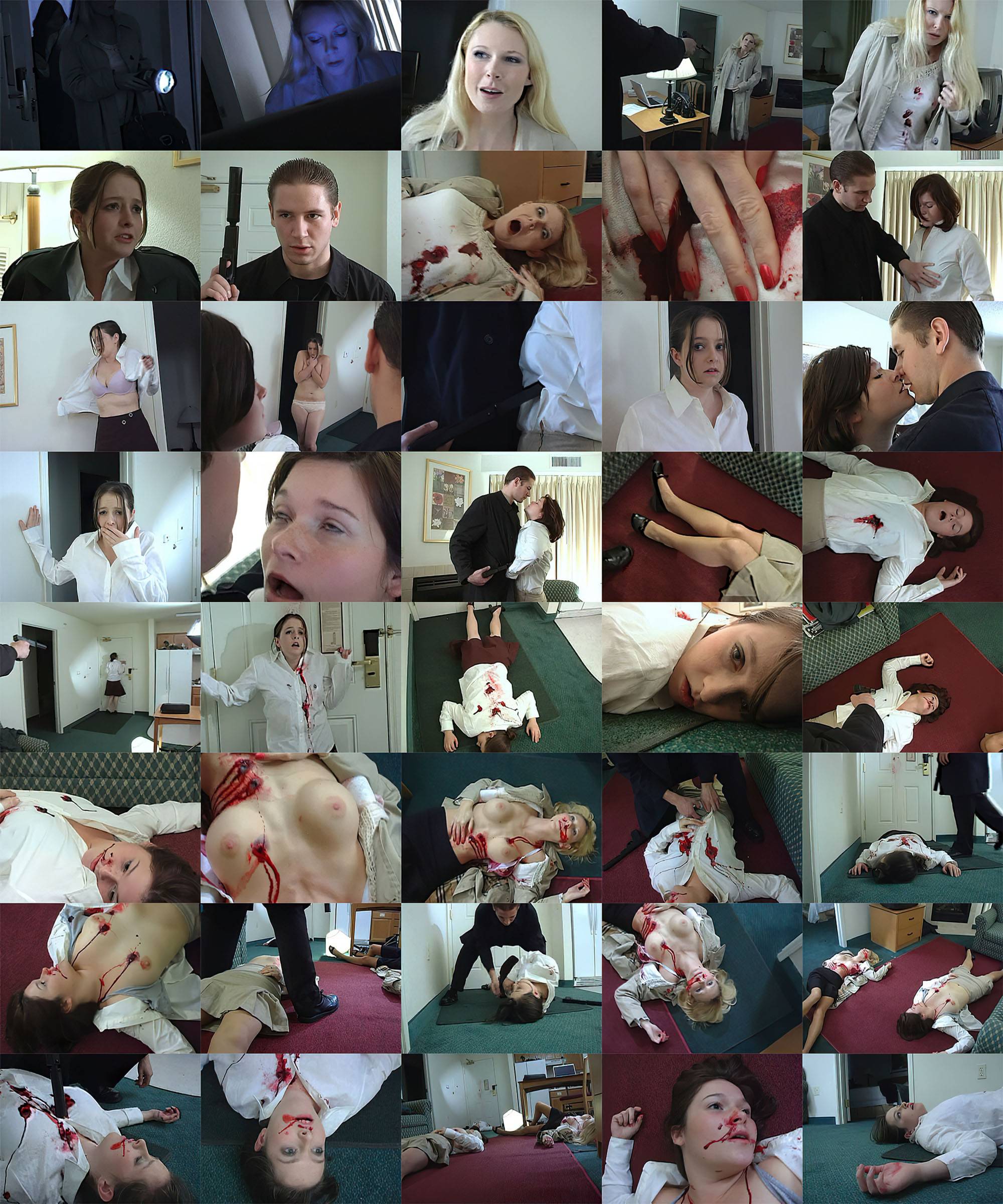 Not wanting this moment to go to waste, he fucks her a bunch more in various positions. 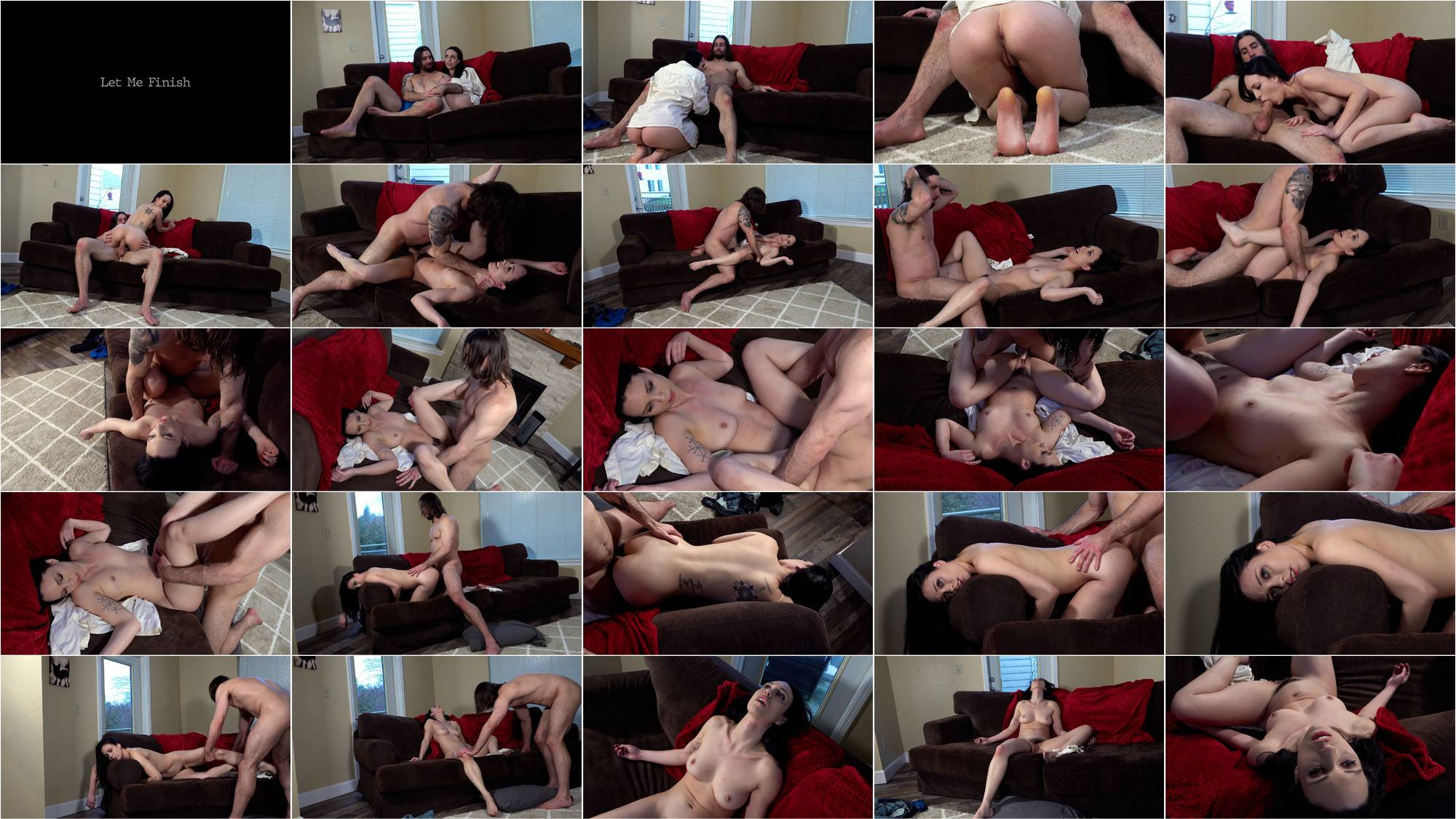 A woman's date is cancelled so she decides to make the evening hers and pleasures herself both in bed and in her bath. But her "date" has been in her home all along, watching. What will he do to her?

Read this 27 page comic book to find out. 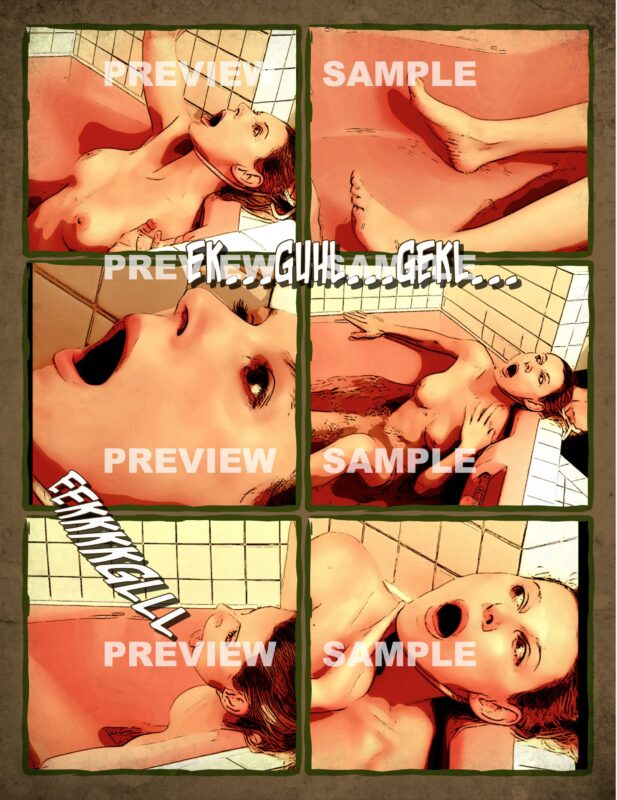 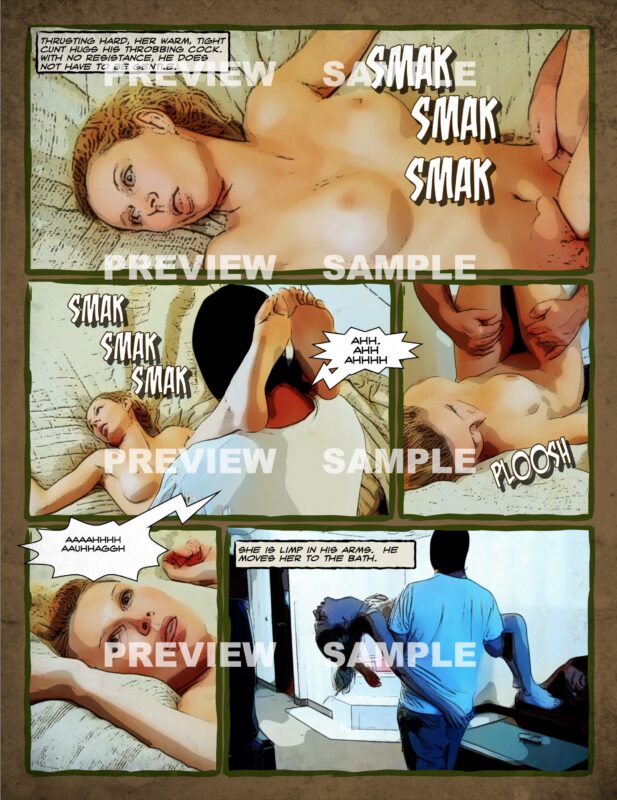 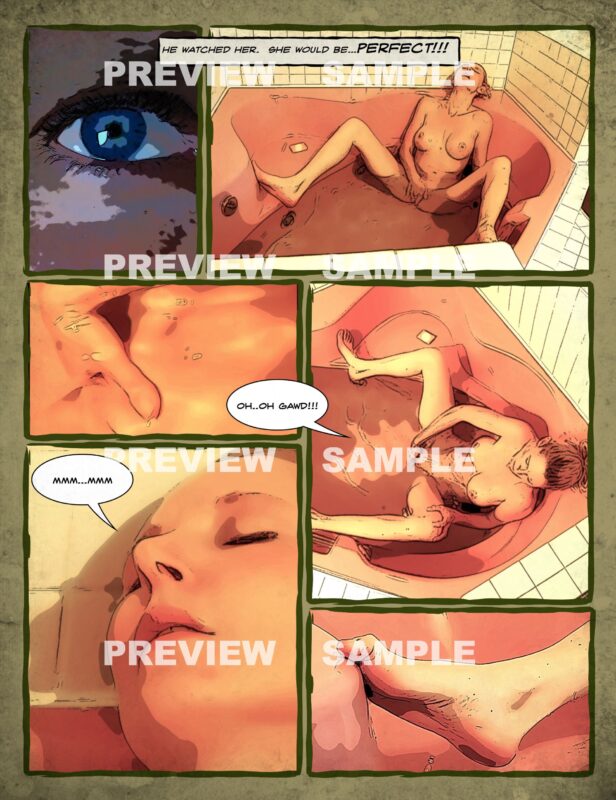 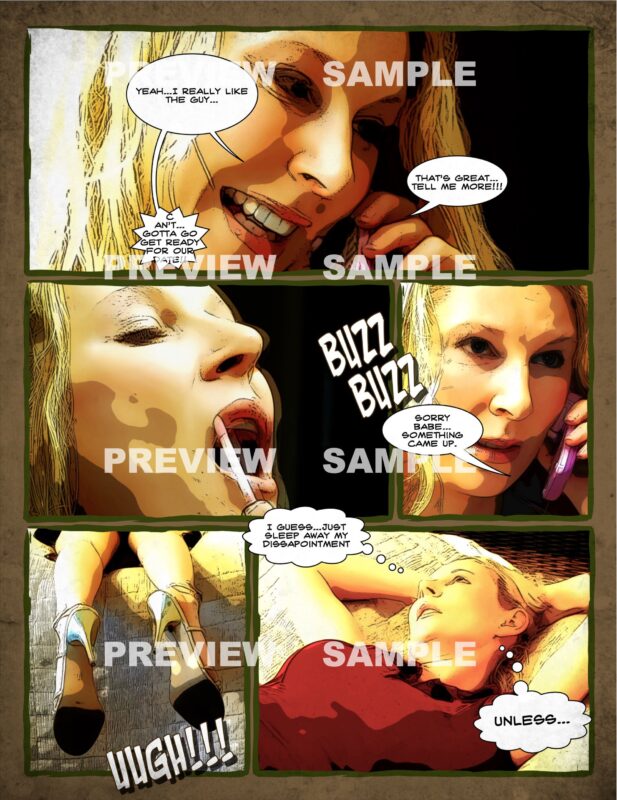 OR, if you are interested in purchasing the full movie this comic is based off of:
https://www.pkfstudios.com/updates/stra ... lled-date/
CHAT • COMMUNITY • UPDATES
VISIT: THE PKF FORUM

A woman is executed. Later, in the morgue, she receives the full work up--undressing, examination, and washing. Later, the soldier who shot her comes back disguised as an orderly and has his way with her lifeless corpse.

Note: Actresses are over 18 at the time of filming and the word "teen", "teenage", "young girl" is only meant to imply legal age characters regardless of audience interpretation. 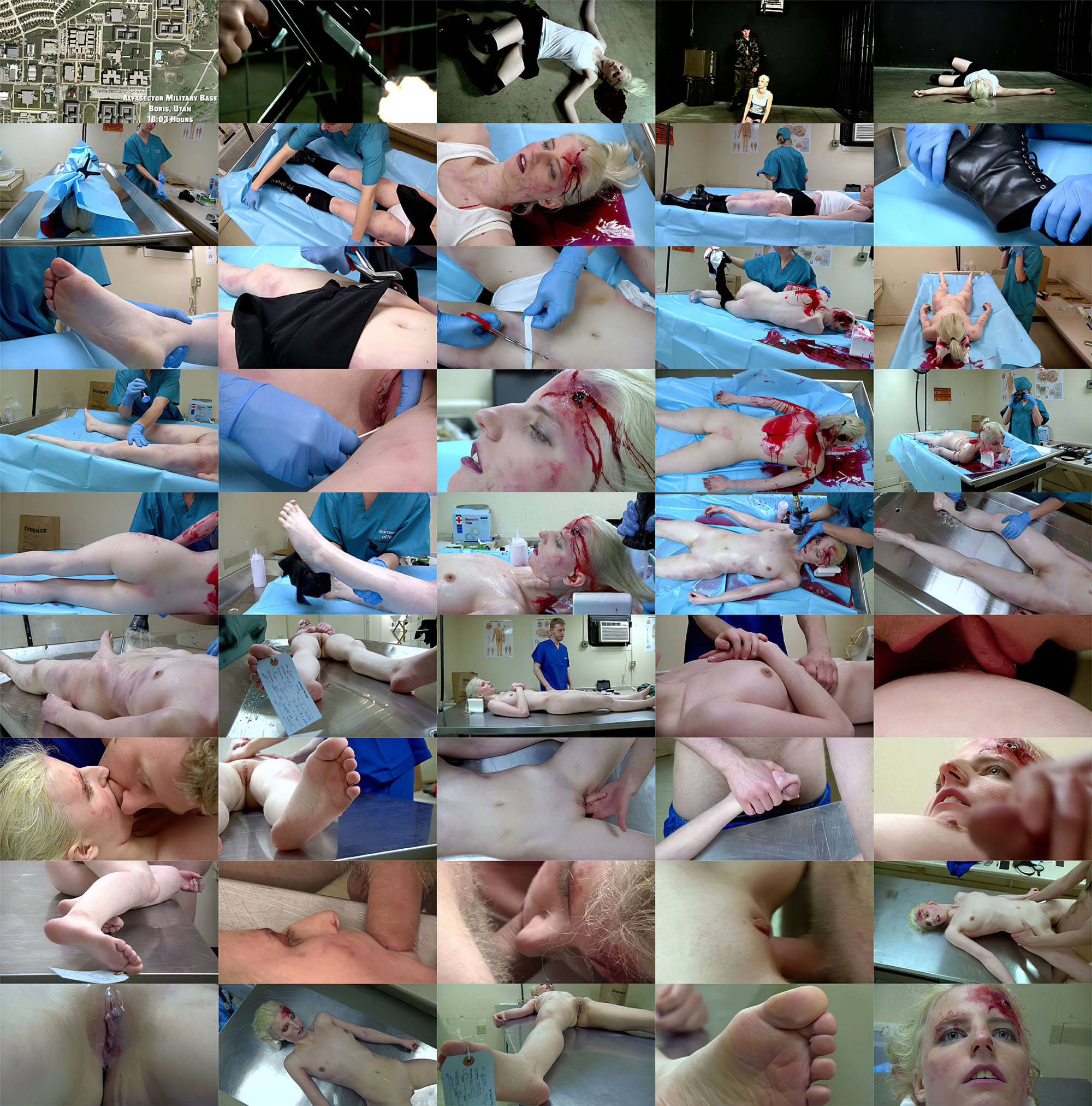 He saw her at the outlet mall earlier in the day She was so sexy in that red dress, he decided to follow her home.

He snuck up behind her as she laid on her couch and put her out after a short struggle. On the bed, he worshipped her sexy body, slowly unwrapping his present.

When she woke, he forced himself on her, wanting to take in everything about her. She tried to get away---weakly. But he would not let her and forced her to comply implying violence if she did not. He fucked her hard and long in several positions.

Toward the end, though, he realized that he wanted that feeling---the feeling he got from the last victim the moment she died. With his cock hard and fucking her tight pussy, he grabbed her neck and proceeded to kill her. He felt the walls of her vagina tighten around his member. The feeling was incredible and he kept fucking her until she was dead and then kept fucking her until he was finished.

He left her dead in her bed, another victim of his lust and disregard. 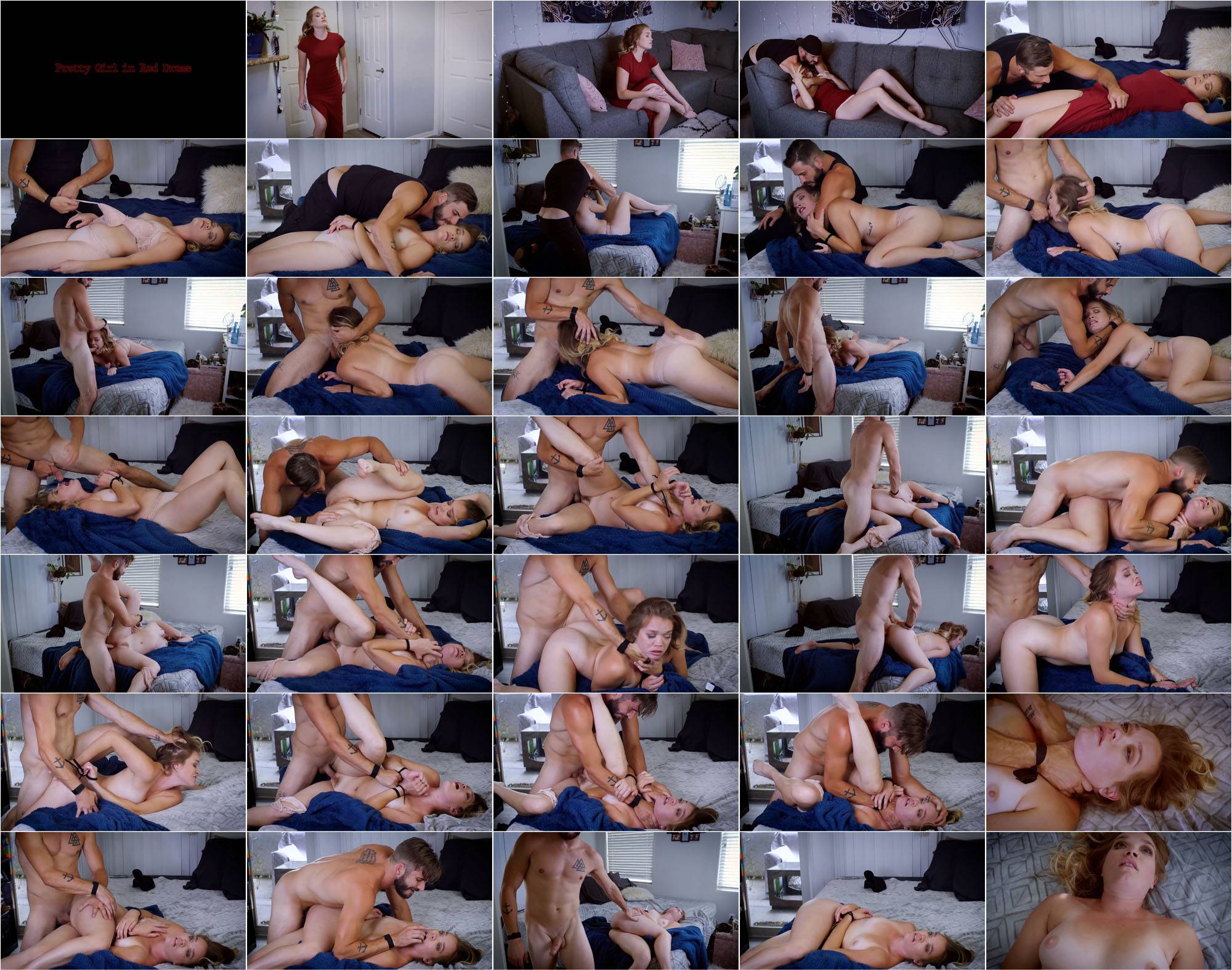 19RCS88
Posts: 82
Joined: Sat Jul 09, 2016 12:46 pm
What is your main fetish?: Shower stabbings & drowning.
Why do you want to join this forum?: So I can comment and look at the other studios that are releasing content.
Referral: I found out through people on other forums such as PKF studios.
Contact:
Contact 19RCS88
Send private message

Is the Coco you're having at your studio soon the same Coco that did films for Chris Corner?
My Vimeo page. https://vimeo.com/user65229322
Top

19RCS88
Posts: 82
Joined: Sat Jul 09, 2016 12:46 pm
What is your main fetish?: Shower stabbings & drowning.
Why do you want to join this forum?: So I can comment and look at the other studios that are releasing content.
Referral: I found out through people on other forums such as PKF studios.
Contact:
Contact 19RCS88
Send private message

That's great to hear. I know you wanted to have her at your Studio for a long time.
My Vimeo page. https://vimeo.com/user65229322
Top

Actually, it was more that people kept thinking she worked for me already and I had to turn them away. I reached out once in 2018 right as she retired. But, recently she did cosplay acting for a producer friend of mine and through that connection was interested in doing some work for me.

Omg! Coco is AMAZING!!! Keep us posted on her material, John!!!! Looking forward to see what she will be doing with you!
Top

The custom site has been updated with the latest bookings:

A young woman is out for a walk in the city near a rural area that has nice paths. A man watches her. He has been waiting in the same spot for days, looking for just the right one. He follows her, then sneaks up behind her, grabbing her and taking her down the hill into the camouflage of the forest. If anyone saw, they probably thought it was just young couple playing around. She was caught completely off guard.

The girl struggles as he tries to assault her and manages to escape...but only for a moment before he knocks her unconscious.

He then molests the girl, eventually fucking her mouth. Then he slips his cock into the unconscious young woman and fucks her.

After a bit, she regains consciousness and catching him off guard with his pants down she tries to run off. But, having just recovered from being knocked out, she was not fast and he quickly recaptures her.

This time, he puts an end to her struggles. He wraps a garrote around her neck and slowly strangles her to death. When it is over he takes his sweet time fucking her mouth, then her corpse until he busts his load all over her tight cute ass.

He leaves her dead, sprawled out in the forest. 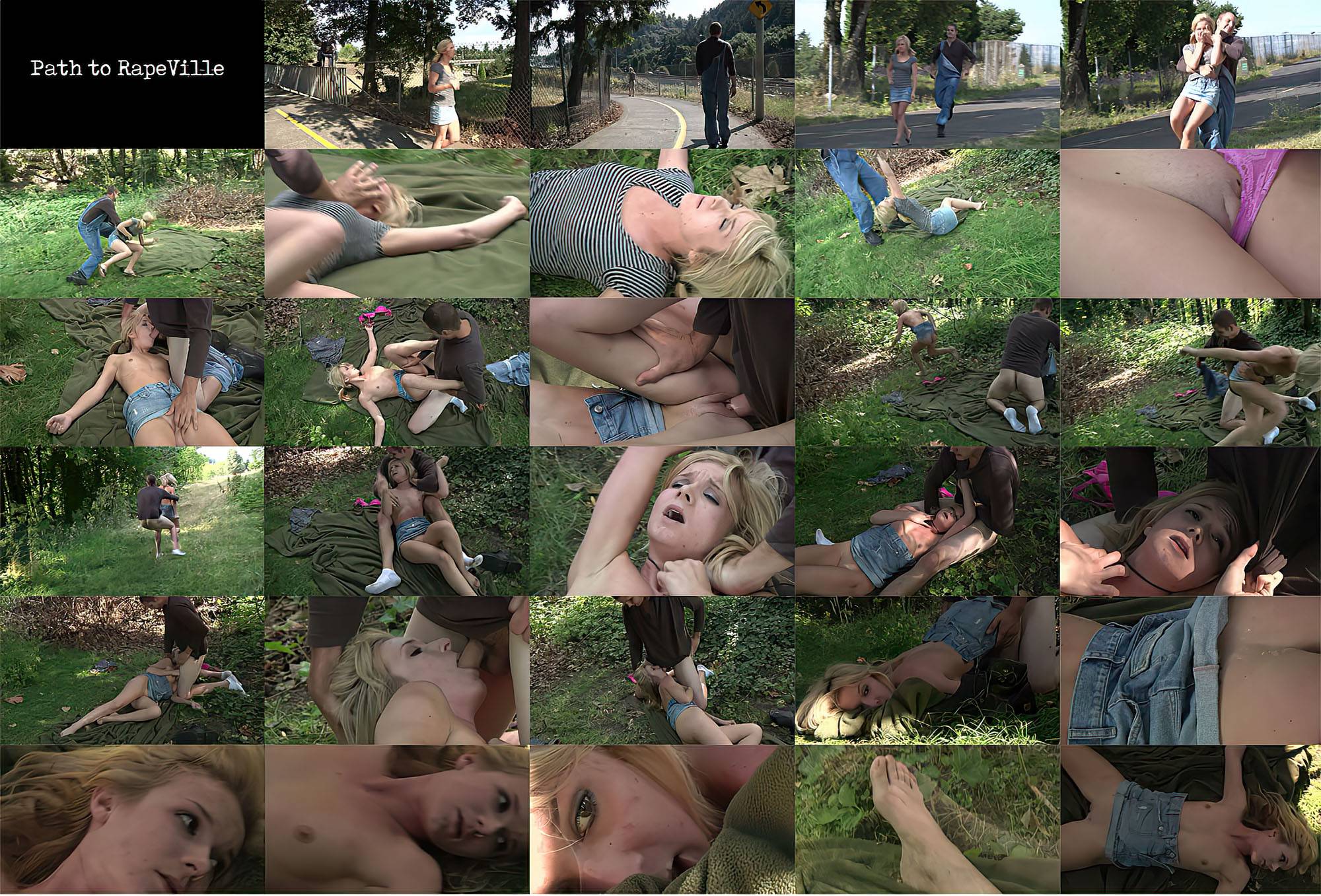