Reviews of Olaf Winter's amazon films should be posted on this forum!

Heracles
Posts: 26
Joined: Wed Apr 26, 2017 8:10 am
What is your main fetish?: Topless Amazon Warriors fighting each other, preferably with swords or daggers in one-on-one-duels and arena matches.
Why do you want to join this forum?: Communicate with and write reviews for producers adhering to my preferences.
Referral: It came up on Google one day...
Contact:
Contact Heracles
Send private message

“Daughters of the Wild”, starring Talanis and Leandra was released September 2019. Talanis and Leandra both portray scantily clad barbarian warriors in sexy leopard skin outfits that do not leave much to the imagination. This was apparently a custom video, conceived by the writer who also commissioned “Dance of Death”. The runtime is roughly 7 minutes.

The video fades from black as Leandra ties the unconscious Talanis to the cave wall. Leandra is displeased by Talanis’ tribe trespassing and hunting in her tribe’s territory and wants to gather information about their hideout. As Talanis wakes up, Leandra begins to question her, and we are treated to some very nice shots of Leandra menacingly pointing a dagger at Talanis exquisite navel, who desperately tries to get away from the blade. However, Talanis manages to free herself while Leandra is momentarily distracted and manages to surprise and overpower her. After a short struggle, Talanis stabs Leandra right in the heart with her own dagger. But her victory is short-lived, and shortly after leaving the cave she is shot down with several arrows and ultimately brought down by a flung spear.

Plotwise, this video just offers what is absolutely necessary to drive the action forward, but it works well and the individual performances are terrific, just as we’d expect from such veterans as Talanis and Leandra. The very revealing outfits do not hurt, either. Leandra is dressed a bit more modestly with a leopard skin bra, while Talanis is topless and offers us great views of her amazing butt and, well, pretty much everything else. I would have wished for more shots of her feet during the video’s climax, though.

Every video needs that one big death scene, or money shot, or whatever you want to call it. While Leandras demise is nothing to be scoffed at, the spotlight clearly belongs to Talanis’ spectacular death scene, which is in a class of its own.
From Talanis struggling to stay on her feet after being peppered with arrows until a spear finally brings her down, to her gasping for air with her tongue hanging from her mouth and finally, my favourite shot in this entire video, showing her from an angle above her head, giving us a good view of her entire body as she squirms on the ground, this is simply a spectacular finale. 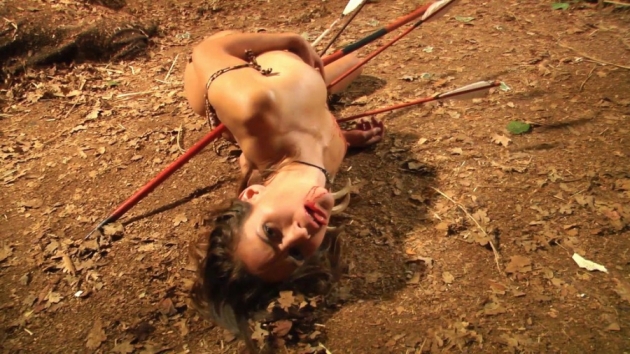 My jaw dropped when the shot above appeared, and I realized I’d forgotten to breathe until the video was over, I was so taken in by the last few moments of Talanis’ demise.

My only criticism: The video ends, almost abruptly, right after Talanis takes her last breath. Usually, there is a good minute of shots from every angle of the fallen warriors after the action is over. I hope that material didn’t just end up on the cutting room floor!
Also, the scene with Talanis tied up could have been a bit longer. I don’t know about you, but I could watch her react to Leandra threatening her navel with a dagger for hours.

I highly recommend this video for the reasons I listed above, and I sincerely hope for more videos in a similar vein.

Return to “Reviews of Amazon Warriors”

Users browsing this forum: No registered users and 2 guests